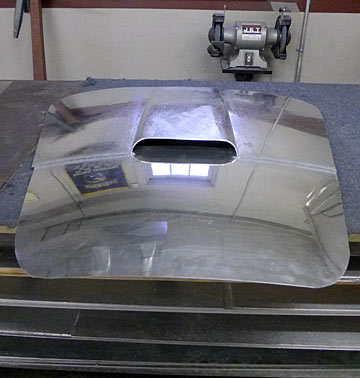 Hi Joe,
My Cobra has never looked better. You are a true artisan from an era gone by. Thanks Joe, I had not a single worry.
Be Well,
Wayne Odle

The process of panel creation

Creating a work of art requires inspiration, imagination, intuition, skill and a lot of hard work. When it comes to fabricating hand-rolled sheet metal for vintage car chassis, Joe Stafford of Panel Craft LLC provides all the requisite ingredients.

It begins with the model. Most of the time, Stafford is able to use the original car, from which he creates a template after taking measurements. "Even if there's only one fender, I can do it," he says. One fender provides the proper scale. From there, he can mirror the image on the other side of the car.

If he doesn't have the back end of the car, he can still get the height of the fenders, the lift, the volume and other details. Stafford relies heavily on intuition and previous knowledge as he carefully examines the chassis, observing subtle details. "I also look for what isn't there," he adds, relying on shadows and reflections to provide hints about the shapes of the bodywork. "I study shapes, not the car." 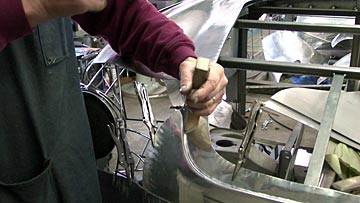 ...I have known Joe for some time, his quality is top notch for any metal application. A true craftsman and master at fabrication. Two thumbs up!
Jeffrey S. Gagnon
Worthen Industries
Director of Manufacturing

If the original car isn't available, Stafford turns to photos - of which he has tens of thousands, many of which he took at car shows. If he doesn't have it, it's likely to be found on Instagram or elsewhere on the Internet. He will then track the photographers by their photo credit and purchase the images. Once he has the photo, he has transparencies made to use on an overhead projector to create a life-size image on a large white background, which he then cuts into three-dimensional templates. These are then used to form individual stations constructed with wire. After welding the wire onto the chassis and creating a 3-D grid pattern, he lays the buck template over the chassis to begin shaping.

After the buck is properly proportioned, Stafford needs to lay out how he wants to cut the blanks - flat pieces. He does this by attaching a paper template to the buck in a manner similar to creating darts in a sewing pattern. He then traces the outline and cuts it out with shears or a saw to create a blank, which is critical for shaping.

Next, he lays the metal on a leather bag filled with bird shot and uses blocking hammers with round heads to starts hammering. Once he has the rough shape, he proceeds to the English wheel to roll out the bumps and refine the shape, all the while checking the shape against the buck. Wherever it touches indicates that the panel needs more work. Continuing to check his work against the buck, he looks for small scratches on the inside of the panel that indicate areas that need more shape. Because it's not possible to make a fender out of one panel, he welds smaller panels together to create the bodywork. To eliminate warping, he stress relieves the panels. This allows the panels to revert to their original shape.

This wire method is the fastest and most cost-efficient, so he uses it frequently, but if he's struggling to find the form, he turns to sculpting. He lays urethane foam over the chassis and begins carving. If too much material is removed, he can simply add more. Once the form is created, he adds a layer of fiberglass to stabilize the final model.

Tools of the trade 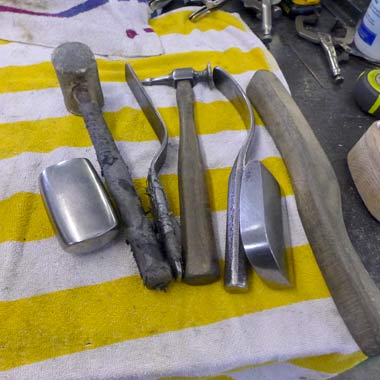 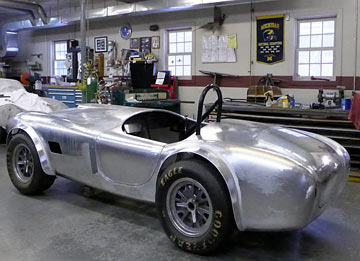 Stafford calls sculpting "just another tool" for creating the body pieces, so his shop is filled with a number of specialty tools to create these body panels out of specially chosen sheet aluminum and steel.

There are lots of alloys out there, but a couple work best for Stafford's work, such as 1100, which he says is conducive to hand-shaving and is "very pure" at more than 99 percent. It used to be cheap and plentiful, he observes, but it's getting harder to find. He says that 3003 is also good, but you can't anneal it.

He uses cold-rolled mild steel - 1010 or 1020, typically. "I try to keep it simple," he says of his choice of materials. To form that material into body pieces, he uses two wheels. One is a 42-inch FJ Edwards, made in England in 1955, the other is a smaller 24-inch wheel, plus the Kraftformer. The two English wheels feature an idler wheel on top and smaller lower wheels called anvils that feature a number of different radii. The anvils, which rest in a yolk, are interchangeable.

To shape the metal, Stafford uses blocking hammers collected over the years - all of them modified to suit. "The handles are important," he explains. "They must feel comfortable."

Copying is harder than creating a new design, Stafford believes, but with the right tools, skills and experience, he's able to re-create accurate bodywork for vintage sports cars.